I didn't realize how fun it would be to paint these guys up when I picked the No Respite expansion for Blackstone Fortress. Now I have a nice size stack of Death Guard to build and paint. 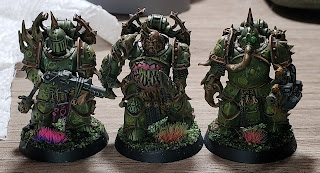 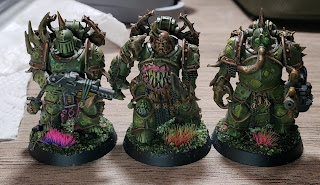 Posted by Greg Osborn at 2:11 PM No comments:

Working on Some Stuff

I've not done any hobby projects since working on my Drukhari models. I attempted working on some of the models from Raging Heroes' TGG2 kickstarter and became horribly frustrated and pissed off with how brittle and poorly designed the miniatures were. So much so that it drove me away from working on other projects. But I finally got out of my funk and got some projects started.
For Necromunda I got these put together and nearly finished for a Chaos Cult.

Not a bad start. I added the Blackstone Fortress expansions Escalation and Traitor Command to fill the cult out so I can use them for Kill Team as well.

Then, I assembled one squad of Thousand Sons Rubric Marines for a Kill Team.

I decided to go away from the studio turquoise and used some shoulder pads and heads from Maxmini. Tzaangors will be added later.
But wait, there's more!

I cracked open the No Respite expansion for Blackstone Fortress and got the poxwalkers built. The plague marines will be next. I'm wanting to work on a few different forces so that I dont get burned out. May sound weird but I get bored working on the same miniatures after a few days. The plan is to work on both the Death Guard and Thousand Sons kill teams. However, I'm still waiting for my box of Space Marine Heroes series 3 to arrive.
As I get progress done on those, I want to get the rest of my Blackstone Fortress models assembled and ready for painting.
Posted by Greg Osborn at 11:02 PM No comments:

Getting Back on the Horse

So... this is a thing. I used to paint a lot, a whole hell of lot. I used to crank out 20-30 infantry models a week easily. I used to submit models to competitions, the big one being the Golden Demon in Chicago. It was all about the love for the hobby and having fun, not winning, which I had no shot at.

Some people get jealous and even mad at people who are exceptional artists. I don't understand that. Meeting the other painters and seeing their work just lit a fire under my ass to get to their level. And in 2008 I was starting to see real progress. Then I just stopped, never touched a brush again until early 2015. I started to get back into it a bit but never found the joy I used to have for it. I really hate the assembly part, it's why the mountain of models I have stay in their boxes collecting dust.

The Golden Demon compettion has not been in Chicago for a good seven years(+/-). Games Workshop has brought it back and I've decidied to enter. I've been in a creative rut for too long. I used to draw, I haven't done that since 1997. Thank you Marvel for the super harsh criticism. I used to write damn near everyday, it has been a good twelve years since I've done that. Podcasting started to feel like a second job. Painting has seemed like a joyless chore instead of a relaxing and fun hobby since started back up. I want to change that.

I'm giving the Golden Demon a go. I know that I have zero chance of winning and that's not the goal. I'm hoping I can break out of this funk and enjoy the stuff that I used to love doing.

I just picked up the new Shadowsun today and hopefully can get her finished in time for Adepticon.

Wish I knew who did this so I could give them proper credit. 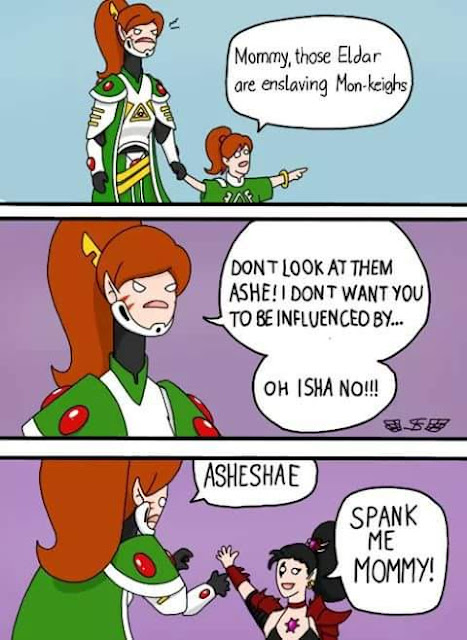 Posted by Greg Osborn at 2:43 PM No comments:

There is a prominent Adepta Sororitas/Sisters of Battle group on Facebook ran by James Otero. It's a closed group so James is free to run it however he wants, I will not debate that. That does not mean that I have to agree with policies put into place for the group.

We all know it's hard being a Sisters player. Games Workshop has allowed the army to flounder for decades with poor rules and the lack of plastic models. It could be worse, the Sisters could have been done away with like the Squats and this point maybe that would have been the better option.

The cost of being able to field a base Sororitas army of two units of troops and an HQ is $175. Even worse for people elsewhere, $302 for our friends in Australia. Even for veteran Sisters players the cost of adding new units has a large barrier, $103 if I want to add one Retributor squad, $55 for a Dominion squad. The prices may not seem quite that bad but seeing how all the models are all metal and exclusively sold by GW on their web shop or in GW stores, that's insult to injury.

Back to the matter, James decided that any posts of models in the group had to be entirely Games Workshop models and conversions (as it seemed to me) would be okay as along is was mostly GW parts or if he found it to be acceptable. He went out of his way to specifically ban any posts related to Raging Heroes. Again his group, he can run it however he sees fit, but I'm calling bullshit on the whole thing.

Other companies have filled the Sisters of Battle void, primarily Raging Heroes because of Games Workshop's deliberate lack support for the army and its players. My problem of banning players from community groups because they had to go to another manufacturer is just a deaf, blind and dumb decision. Communities such as this should not be barring new or existing players for any reason outside of negligent behavior. Either you're an ambassador to the hobby and the game or you're an elitist jerk. If you take the elitist jerk route, I'm going to call you out on it.

I don't care if you're a shop owner or some admin in a Facebook group. The moment you start completely barring people from a community, you're inflicting harm on it and quite possibly causing that new player to abandon a game or hobby that he/she was looking forward to be involved in. It's not their fault that GW put a gate up. I despise it as much as new hobbyists being told that their paint jobs suck or that they should quit. It goes hand in hand with super fans talking down to new fans or fans of a property that may not know absolutely everything about it. Stop it.

And speaking of the models by Raging Heroes, the whole over sexualized argument, just stop. Sexy models are not going away and the ones Raging Heroes have put out are no worse than stuff that's been released in the past. The argument that the armor is not realistic, just stop, the setting for these games is not realistic. The people making these models have the right to artistic freedom, just like a group admin has the right wield the ban hammer, even if done so ignorantly. Kind of funny though; I see people crusading against models the likes of Raging Heroes, but I have yet to see any of those same people complaining about Kingdom Death and others.

Anyways, I gave my two cents in the group, I left and am now contemplating starting a new Sisters/Sororitas community group. Rant over, at least for now, because I have a podcast to record.

Working on Some Stuff

Lot of overtime at work means no hobby time. Finally got a chance to work on some stuff. 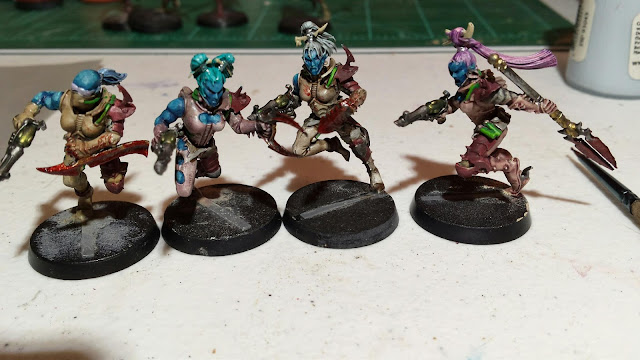 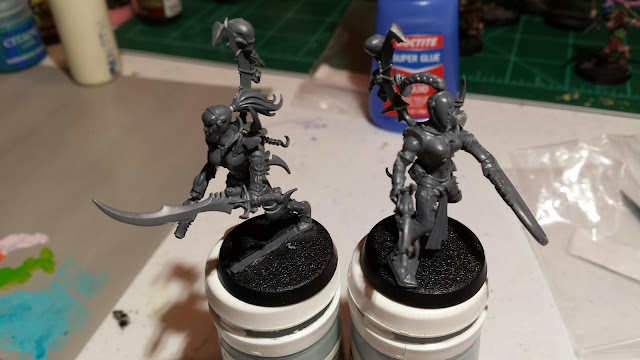 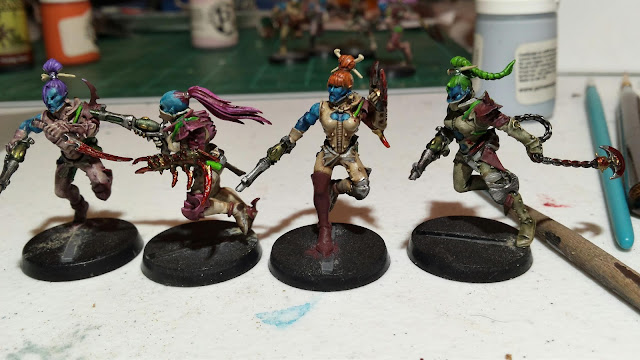 Posted by Greg Osborn at 6:12 AM No comments:

Daughters of the Crucible Playtesting

It's a shame that the Daughters of the Crucible from Raging heroes do not have an equivalent in Warhammer 40K. That's why John and I have made up some homebrewed rules for these stunning models.

We looked at what story background Raging Heroes had put out there during the Kickstarter campaign and decided to go with something of a gun slinging character unit based on the Blood Angels Death Company.

These rules are available for anybody who would like to give these rules a go and help us refine them. If you share or post them elsewhere, even if you alter the rules, please dothe right thing and credit us appropriately.

Act of Faith:  Redemption by Victory or Death- This Act of Faith may be used at the start of any opponent’s Assault Phase. Until the end of the turn that this Act of Faith is used, this unit gains the Counter Attack special rule.


May add up to five additional models for 20 points each, a maximum of ten Daughters may be taken per army.

Let us know what you think and send us feedback from your games.